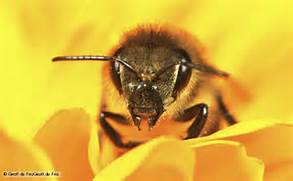 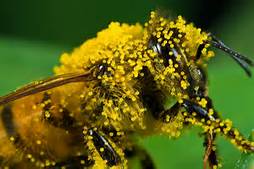 One of the things that I love with my morning cup of tea is honey with lemon. I began to notice that after a couple years of this relaxing morning pleasure, my incidences of allergy issues diminished.

Honeybees are being sent around many regions of the country. The importance of this is not to be downplayed.  These ‘workers’ have been able to pollinate about $40 billion dollars of the USA’s agricultural produce each and every year.  We wondered why our trees had blossoms but were not producing fruit. We then discovered that in our area, bees were in serious decline. We learned that more then 130 fruits vegetables and fruits that we enjoy here in America, that are important for a diet that is healthy and important for well rounded nutrition, can be credited to those honeybees.

According to the reports that we have read, there are commercial bees that are raised on bee farms, and sent to other farms to help with pollinating. The wild bees and the commercial bees are the responsible workers for the pollinating that necessary for about 80% of all the crops of food grown in the USA.

We found articles, watching National Geographic and internet social media videos, and began to see that very few American’s are really aware of the impending serious nature of the decline and disappearing bee population across our nation. It appears that in the last five years from 2012 to 2017, about 30% to 40% of our national bee population are gone, and almost a third of all of the hives of bees here in the U.S. have according to experts….disappeared.

Then we posed questions here at the “Concord Show,” and began to realize that just reporting on this concern was not enough. Many of us and our small support group of concerned citizens, felt it important to take steps. People in our close knit group read and educated ourselves.  We turned to others in the group to brain storm and share the knowledge from reading and research.  We started out with one hive and a few weeks later, a second hive.

We discovered that there was more spraying of pesticides and chemicals even out in the country then we imagined. And we noticed a double and triple increase of planes without the required identifying numbers on the plane, spraying criss-cross contrails like a tic tac toe board across our Western skies. Reports of dead and dying bees, and even more concerning were the reports of people going to urgent care and clinics and their providers for various aliments. The increase of cancer across the board, but especially in the Western states. On the Internet we found a website entitled “GLOBAL RESEARCH” of which an article was

Death and Extinction of the Bees

“With so much at stake, efforts to investigate and uncover reasons for this sudden global pandemic have been robust. A new government study blames a combination of factors for the mysterious and dramatic loss of honeybees, including increased use of pesticides especially in the US, shrinking habitats, multiple viruses, poor nutrition and genetics, and even cell phone towers. However, according to last year’s joint EPA-USDA study, the biggest cause is the parasite called the Varroa destructor, a type of mite found to be highly resistant to the insecticides that US beekeepers have used in attempts to control the mites from inside the beehives. Moreover, new virus species have been found in the US and several of these have been associated with Colony Collapse Disorder.

In a vicious cycle, since 1987 when the Varroa mite was first discovered in the US, Monsanto, Dow, Bayer and other large chemical manufacturers aggressively glommed onto the bee industry selling genetically modified insecticides and herbicides as the quick and easy fix to remedy the parasitic invasion, only to weaken the bees’ natural genetic defenses to fight off the parasite. In an article from the Guardian earlier this month, Monsanto’s contribution to the vanishing bee population is detailed.”

“At the end of the day, the honey bee crisis is a human health crisis. If we can’t save bees, we can kiss goodbye the most nutritious part of the food pyramid. That’s just not an outcome we at Earthjustice are willing to accept.“

photo by  CHRIS JORDAN-BLOCH / EARTHJUSTICE
Dr. Kegley shows attorney Greg Loarie a bee box in the backyard of her home in California.

Bees are rapidly disappearing around the U.S., and that could be potentially devastating, because bees are essential to the production of many major food crops. Without bees, there would be no blueberries or apples. Now one Iowa honey company says vandals smashed 50 beehives and killed at least half a million bees, and nearly destroyed the entire business completely.

Justin and Tori Engelhardt of Iowa’s Wild Hill Honey discovered the smashed beehives on Thursday, December 28, when they went out in the morning to check on the bees. All 50 of their hives had been smashed to pieces. The bees, unable to survive the cold temperatures outside the hive, were piled dead in the snow. Justin Engelhardt said nothing was stolen except for the security camera.

At the time, Engelhardt said the destruction had probably destroyed Wild Hill Honey completely, because insurers don’t offer beehive insurance and the business couldn’t absorb the approximately $50,000 worth of damage that had been done.

Since news of the vandalism got out, however, Go Fund Me efforts on Wild Hill Honey’s behalf have raised more than $35,000. Engelhardt posted to the company’s Facebook page that the money would allow them to rebuild and start operating again in the spring.

“Thank you to everyone for your generous contributions and your amazing show of support. Because of you, we will be able to continue our business in the spring. We are deeply moved by your compassion,” Engelhardt wrote on Facebook. “Between the contributions and the equipment we were able to salvage, our needs have been met. There are so many great causes to support. Our wish is that this spirit of compassion will be used to help others now. All fundraisers for Wild Hill Honey are now closed. Thank you.”

Smashing the beehives and killing half a million bees was a senseless attack, and police are still looking for the culprits. But the fact that thousands of strangers saved the business from ruin makes this one of the most inspiring food stories of 2017.

By
Taylor Rock
Editor
As the population of bees continues to decline, scientists are finding significant traces of chemicals in the honey they produce
The honey you spread on your toast in the morning likely contains harmful pesticides that may already be affecting the planet’s bee population. According to The Guardian, new research shows that out of 200 honey samples, 75 percent contained neonicotinoids — an extremely toxic insecticide that affects the central nervous system of insects, resulting in paralysis and death

Three-quarters of the world’s crops owe their vitality to bees, which have been in serious decline over recent decades. This new study, called “Nerve Agents in Honey,” was conducted by researchers at the Botanical Garden of Neuchâtel in Switzerland. It joins multiple other reports in highlighting the unintended effects that the pesticides farmers use on their crops are having on wildlife around the world

Contamination rates are highest in North America, with 86 percent of samples containing one or more neonicotinoid, followed by Asia at 80 percent and Europe at 79 percent. The lowest was South America at 57 percent. All but two samples showed contamination levels below the “maximum residue level” allowed for human consumption under European Union laws.

“The global neonicotinoid contamination in honey is another reminder that wildlife is threatened by these chemicals around the world,” Buglife UK’s Matt Shardlow told The Guardian. “There is growing momentum in support of a new global solution to ensure that high standards of protection for the environment and people are applied everywhere